At our parish, as with most Orthodox parishes, we sing the Paschal hymn, “Christ is risen,” to several melodies. Our favorite by far is a Galician tune that has rhythm, a definite meter and repeated bits of text. We don’t normally go for those type of “folksy” settings, but this one is long-standing and does the job very well.

One of the reasons people enjoy it is that it has a very march-like, predictable rhythm. In fact, at “trampling down death by death,” the melody puts quarter notes on “death by death” on three repeated notes. It’s rather driving. It’s no surprise that, over the years, the exuberant among us (me included) have quite naturally begun to stamp their feet three times there. One can hardly help it. In fact, I’d argue that one has to keep oneself from it. Of course, the kids really like it, as does one of our adult Serbs and old Russian.

Now, this isn’t a parish that stands on much ceremony. I think that if there were a low church Book of Common Prayer version of the Orthodox liturgy, they’d take it in a heartbeat. It’s not an especially quiet parish. They frequently have to be reminded that we enter and exit the church quietly. But it’s hard to get Oregonians to not chit-chat, even during Lent when we pray against “idle words.”

So, what about the exuberance of others’ – who are normally quiet in church — stamping when singing about Christ Jesus trampling on death annoys them is beyond me. But annoyed they are, though thankfully not to the point of making a public deal of it.

True, we take the liturgy of the Church seriously. Even at its most joyous it is not to be a flippant and foolish spectacle. But we do need to be careful about taking King David’s (first) wife, Michal, as a model. In 2 Samuel 6 (2 Kingdoms LXX), David is festively bringing the Ark of the Covenant into the city, and David is joyously dancing before it. And Michal doesn’t like it. She sarcastically remarks about “how the King of Israel got himself honor today!” And berates him stripping off his robes and dancing in naught but an ephod. (You can go figure that out yourself.)

The point is, that David’s exuberance was not appreciated by Michal for the praise that it was. And the Church is not beneath exuberant signs of praise and mercy. When holy water is used, it is usually sprinkled by the priest with a brush. Fwip – fwip – fwip. I find that amusing. When we receive Communion, we receive it like little children being fed by a doting parent — open mouth, spoon in. Not very dignified! When the Thrice-holy is sung at the Anaphora, the priest often dings the Star on the Paten for each “holy”: ding-ding-ding. And what of the jingle bells on censers at so many churches?! “Here comes Santa Clause…” can’t be far from many visitor’s minds! Furthermore, on Pascha, the clergy move through the church more quickly and, in many places (appropriately) shout, “Christ is risen!” as the choir sings the Paschal Canon. I understand that Greek women stamp their feet during the reading of the wedding epistle, as “submit to your husband” is read. And what of the spitting – our priest takes this very literally! – on the Devil when Catechumens are exorcised?!

So, a little stamping in praise of the defeat of Death and the Devil has got to have a place in the praise of the Church that honors our human bodily existence. It certainly drives the point home. 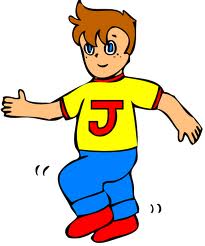 I'm a musician: I teach piano and am a professional Accompanist (University of Portland). I'm also a music director. I direct the St. Nicholas Orthodox Church choir (Portland, OR), the Francis Street Singers (Community Music Center) as well as for Mock's Crest Productions, which puts on an operetta at the U of P each June. I care deeply about the music and worship in the Orthodox liturgy, and most of my postings will be concerned with that.
View all posts by Rdr. John →
This entry was posted in Uncategorized. Bookmark the permalink.